Almost 3 years after the premiere of the 3rd season, Netflix finally revealed the premier dates for the long-anticipated 4th season of Stranger Things. Netflix clarified that the show’s 4th season will be split in two volumes.

The show creators known as the Duffer Brothers took to Netflix’s blog, in a letter directed to fans, to share updates about the show. Stranger Things 4: Volume 1 will premiere May 27, and Volume 2 will follow closely on July 1. Matt and Russ Duffer shared that the show has been renewed for the 5th and final season.

“With nine scripts, over 800 pages, almost two years of filming, thousands of visual effects shots, and a runtime nearly twice the length of any previous season, ‘Stranger Things 4’ was the most challenging season yet, but also the most rewarding one. Everyone involved is incredibly proud of the results, and we can’t wait to share it with you,” the letter read.

“Given the unprecedented length, and to get it to you as soon as possible, Season 4 will be released in two volumes. Volume One will release on May 27; Volume Two will release five weeks later on July 1. So that’s the good news. It’s coming soon. And it’s better than ever. It’s also the beginning of the end.” 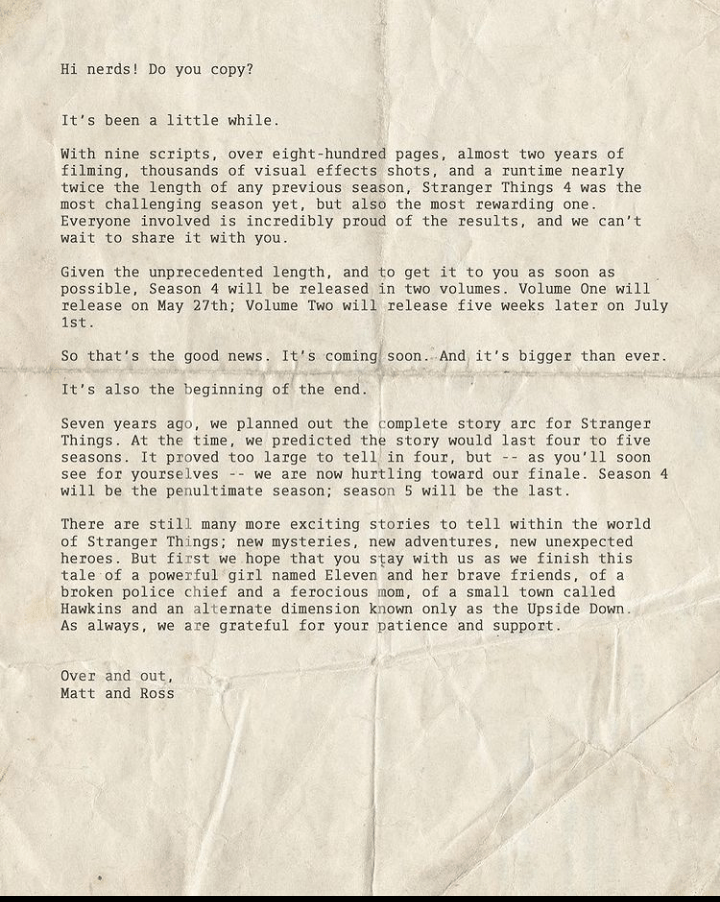 Further into the letter, the brothers said,

“There are still many more exciting stories to tell within the world of Stranger Things; new mysteries, new adventures, new unexpected heroes. But first we hope you stay with us as we finish this tale of a powerful girl named Eleven and her brave friends, of a broken police chief and a ferocious mom, of a small town called Hawkins and an alternate dimension known only as the Upside Down. As always, we are grateful for your patience and support.”

The official description of Stranger Things 4 says that, “It’s been six months since the Battle of Starcourt, which brought terror and destruction to Hawkins. Struggling with the aftermath, our group of friends are separated for the first time — and navigating the complexities of high school hasn’t made things any easier. In this most vulnerable time, a new and horrifying supernatural threat surfaces, presenting a gruesome mystery that, if solved, might finally put an end to the horrors of the Upside Down.”

Overtime, Stranger Things has been nominated for 31 Emmys with 6 wins in the creative arts category.

4 weeks ago Raji Al-ameen
Enable Notifications OK No thanks