As an executive producer and showrunner, Robbie Pickering creates a modern take on Watergate with Gaslit. The movie is based on the first season of the “Slow Burn” podcast, and is set to stream April 24, on Starz. According to the creator,

“Gaslit is the Watergate story you’ve never heard before. At the center of the show is Martha Mitchell, an unlikely whistleblower who is the first person to bust the whole scandal wide open and ultimately becomes the subject of a vicious White House smear campaign enacted in part by her own beloved husband, Attorney General John Mitchell. We also feature John Dean, a hotshot administration lawyer dragged into the coverup and thrust into the spotlight with his acerbic, whip-smart wife, Mo,”

Julia Roberts plays Martha Mitchell, Arkansan socialite and lovely wife to John Mitchell, President Nixon’s Attorney General, played by Sean Penn. Irrespective of her affiliation with the party, she blows the whistle, publicly announcing Nixon’s involvement in Watergate. This leads to an unravelling of her personal life and the presidency. For John Mitchell, he’ll be in dilemma of whom to choose; his wife, Martha or the President. 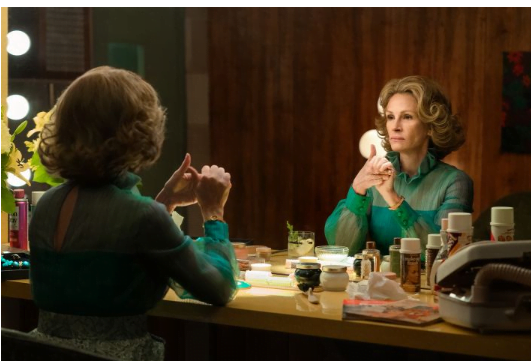 Pickering goes on to say,

“The goal in making this project has always been to bring a real humanity to this subject, which yields a far richer and more relatable story than the standard male-driven political dramas about the period. I can’t wait for viewers to experience the extraordinary performances in this remarkable ensemble, led by Julia Roberts, brought to life in this thrilling, stranger-than-fiction tale of marriage, love, betrayal, and ultimately, hope.”

In a press statement with Variety as part of Starz’s #TaketheLead initiative, Christina Davis, the president of original programming for Starz shares,

“In ‘Gaslit,’ we not only have the opportunity to tell an incredible untold story in bringing Martha Mitchell’s historic role in Watergate to the forefront, but we are also incredibly lucky to have a dream cast including Julia and Sean and the best creative team and partners we could have asked for.”

7 days ago Raji Al-ameen
Enable Notifications OK No thanks