Nigerian instrumentalist, Fela Anikulapo Kuti who is regarded as the godfather of Afrobeat. He is one of the prominent names nominated for induction into the prestigious Rock and Roll hall of fame this year.

Today, May 12, the committee announced the inductees by means of a video through president and CEO, Gregg Harris. But unfortunately, Fela was excluded in the list of inductees. This got Nigerian angry has they had high hope due to the results of the fans ballot

Apparently according to the vote made by fans, Fela came out to be second on the list as he had 520525 votes while Tina Turner made 583196 votes which made the first on the list.

But shockingly The Go-Go who came third and FoFo Fighters who came fifth were inducted into the Rock and Roll hall of fame and also Jay Z who came seventh was also inducted, leaving Nigerians in awe as to why Fela was excluded 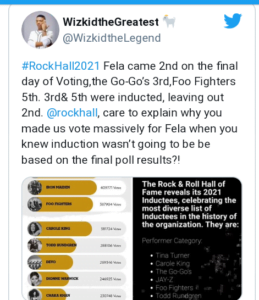 Femi Kuti said there was apparently another vote in which only members could participate and that was what counted while the fans wasn’t necessary, that was the only logical explanation as to why Fela was not inducted 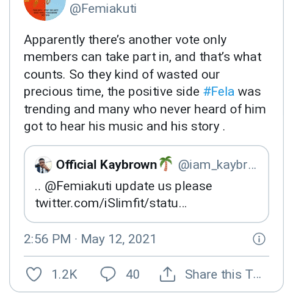 “Made in Lagos” by Wizkid is BRITS’ certified Silver!