The Dutchman will take charge at Old Trafford after completing the current campaign with Ajax Manchester United has announced that Erik ten Hag will take over as manager at the end of the 2021-22 season. Since Sir Alex Ferguson left United in 2013, the Ajax manager will quit his current post and become United’s fifth permanent manager. Ralf Rangnick, who has been temporary manager since Ole Gunnar Solskjaer was fired in November, will be replaced by the Dutchman.

Ten Hag has signed a three-year contract with United, with a 12-month extension option after that, and will join the team following the end of the Dutch league season. During an official interview in March, he wowed Old Trafford bosses, and Joel Glazer and CEO Richard Arnold named him the favored choice earlier this month. United is expected to pay Ajax a £1.6 million compensation fee. The Dutchman wants to end his time with Ajax on a high note by winning the Eredivisie for the third time; his team is now four points ahead of second-placed PSV with five games remaining. He is expected to bring his own backroom team with him and will have immediate input on moves, according to reports. With a number of high-profile players out of contract, United expects a busy summer window as they attempt to rebuild the squad. 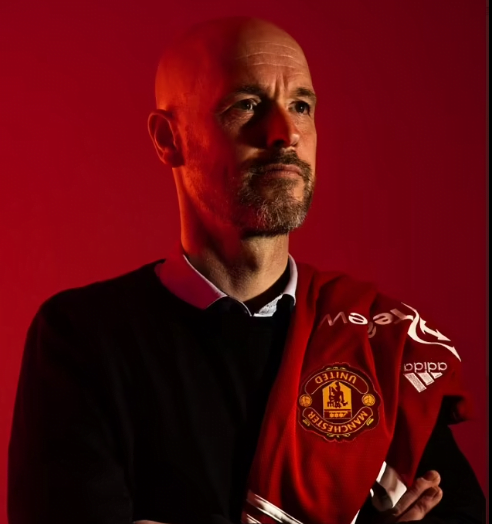 The 52-year-old has told the Red Devils’ official website: “It is a great honour to be appointed manager of Manchester United and I am hugely excited by the challenge ahead. I know the history of this great club and the passion of the fans, and I am absolutely determined to develop a team capable of delivering the success they deserve.

“It will be difficult to leave Ajax after these incredible years, and I can assure our fans of my complete commitment and focus on bringing this season to a successful conclusion before I move to Manchester United.”

United’s football director, John Murtough, added: “During the past four years at Ajax, Erik has proved himself to be one of the most exciting and successful coaches in Europe, renowned for his team’s attractive, attacking football and commitment to youth.

“In our conversations with Erik leading up to this appointment, we were deeply impressed with his long-term vision for returning Manchester United to the level we want to be competing at, and his drive and determination to achieve that.

“We wish Erik the best of luck as he focuses on achieving a successful end to the season at Ajax and look forward to welcoming him to Manchester United this summer.”

Ten Hag has told Ajax’s official website of ending on a “positive note” there: “I’m happy that it has been finalised and that it has been officially announced. That clarity is important. “But I only have one interest now and that’s these last five games. I want to finish my time here on a positive note, by winning the league. By doing so, we’ll qualify directly for the Champions League. Ajax belongs there.”