Spider-Man, real name – Peter Parker –  as we know is one the various Marvel Comic superheroes who we have all grown to love for his charismatic web-shooting ability, spider-sense, also for his being relatable to viewers of all age bracket. If you have been following the Spider-Man movie series closely, you definitely or probably (as is in the case of some people) have noticed that the Spider-Man as a movie franchise has used three separate individual males to portray this comic book character, (with individuals names and franchise in which they appear) – Tobey Maguire ( Spider-Man 1-3 through 2002-2007), Andrew Garfield (The Amazing Spider-Man 1-2 through 2012-2014) and Tom Holland (Spider-Man: Homecoming & Spider-Man: Far From Home through 2014-2019 till present).

Of all these three individuals Spider-Man characters, Tobey Maguire and Tom Holland’s Spider-Man has come to be beloved among fans and critics worldwide with little or no credit or awareness shown toward the Spider-Man character played by Andrew Garfield. For the sake of this article, our focus will be on Tobey Maguire and Tom Holland’s portrayal of Spider-Man by examining the relationship between their well-written storyline and characters trying to find out the similarities and contrast in their roles for fandom sake.

For sake of simplicity, we will be referring to Tobey Maguire’s Spider-Man as Spidey while Tom Holland’s as Friendly Neighborhood Spider-Man.

Whether it is the Tobey or Tom or Andrew’s Spider-Man, they share one thing in common which is the fact that they were orphaned at an early age and had to live in New York with their aunt, whose name is May and she served as a guardian and parent which they never had.

Another noteworthy similarity is in Peter Parker being bitten by a radioactive spider. For Spidey, he got bitten by a radioactive spider when on a field trip to Columbia University science department laboratory when an experimental spider escaped; although where and how Friendly Neighborhood Spider-Man Peter Parker was not fully explained, it was referenced by Ned (Peter’s best friend and classmate) in his statement: “You are the Spider-Man from YouTube?”

The naivety of both Spider-Man characters can be brought up as a similarity as both men had to learn had to master their web-slinging ability. 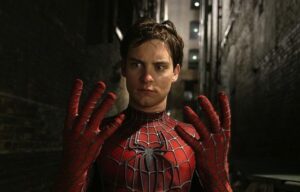 The path taken by Tobey Maguire’s Spider-Man in becoming our beloved superhero was a gruesome task as he had to witness his Uncle Ben humiliating death in front of hundreds of onlookers and endure bullying from students at his high school and coming to terms of his newly gained super ability which happened to fluctuate occasionally as he had to bear the burden of losing his ability to thrust out web from his hands or climb the walls effortlessly or that of a personal level of him being able to see without the glasses or any of the super-strength that comes with being Spider-Man. 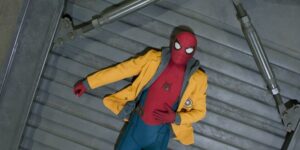 For Tom Holland Spider-Man character, we were relieved of the cliché comic and cinematic storyline that surrounded the lives of Spidey and the Andrew Garfield’s Spider-Man as we were shown a side never shown in the characterization of the latter and former mentioned Spider-Man as we see Tom Holland Peter Parker being easily discovered by Tony Stark (Iron Man) and tracked by affiliate Tom Fury (of Agent of S.H.I.E.L.D) and his eventual call-up to be a part of the Marvel Comic Universe Avengers.

An outstanding feature about the Friendly Neighborhood Spider-Man is seen in his technology advanced suit given him by mentor Tony Stark and the interesting outcome from this discovery is in how he had to learn the nitty-gritty of his new suit.

Unlike other Spider-Man characters who managed to keep their identity a secret, our Friendly Neighborhood Spider-Man identity got leaked by Mysterio, a villain who got killed in a fight with him in the 2019 Spider-Man: Far From Home in a broadcast by Daily Bugle news reporter J. Jonah Jameson as he spreads the fake news of an edited video of Mysterio (before his death) pointing fingers at unmasked (Tom Holland’s) Peter Parker as the reason for his death.

A certainty established by now is the individuality in the characterization of Spidey and Friendly Neighborhood Spider-Man so we can expect that they both had to deal with battling different villain characters as they progressed on their journey of becoming the beloved Spider-Man they turned out to be.

For Spidey, he dealt with deadly villains and his battles with these villains were from a personal point of view right from the jump as he had to deal with the supposed killer of his uncle Dennis Carradine, who got killed in a fight with Tobey Maguire’s Spider-Man; his first major enemy came in the form of a man who played the role of a father to him after the demise of Uncle Ben and father of best friend (Harry), Norman Osborn whose villain alter ego – Green Goblin, a very deadly character who had all sort of arsenal at his disposal like a fiery glider, exploding bombs, metal armor to name a few. Green Goblin was not only deadly but a cunning maestro at showing how wicked he was as he had different ways of drawing out Spidey, he did the most when he attacked Aunt May and this led to his eventual death.

Continuing the personal villainry of spidey is Doctor Octopus, a scientist whom Peter held in high regard as a mentor, who got messed up by a nerve cracking experiment gone wrong and eventually had to be talked out of his destructive ways by Spidey, an event that sadly led to his death. The emotional connection prequel spidey had with his villains continued with Harry Osborn false accusation of (Tom Holland’s) Peter Parker Spider-Man as the killer of his dad (Green Goblin) and his momentary rage led him to discovery of his dad’s Green Goblin suit which he used in attacking spidey until he got saved by Spidey himself and that was the end of their deadly duel.

Other emotional connections spidey had with his villains include Sandman who happened to be Uncle Ben real killer and Venom played by Eddie Brock’s character who was Peter’s envious workmate who eventually led to Peter Parker losing his job at The Daily Bugle as Spider-Man special photographer and reporter to the company.

In the case of Friendly Neighborhood Spider-Man, his villains attacked from a more technologically advanced standpoint and we could say they were successful at being a cun masters at their deceitful craft of being wicked. Vulture, for instance, owner of Toomes Salvage Company who discovered an alien Chitauri technology which he managed to hide from the U.S Government and also led a private life for so many years despite carrying out his evil experiment of building a deadly weapon with the Chitauri technology.

Not forgetting one of the smartest villains ever in the Spider-Man movie franchise, Mysterio a technological optical illusionist who successfully deceived both Spider-Man and his crew – S.H.I.E.L.D – with a false world reality by recreating everything from the buildings to the people to the event (natural disasters) through a CGI device and posing as the hero or quite a while and even to the point of deceitfully convincing our Friendly Neighborhood Spider-Man into handing over the ultimate key to the arsenal Tony Stark gifted him.

But one thing always stands out regardless of the character behind the Spider-Man suit and that is their ability to sense danger and act promptly to save lives.

Whether Mary Jane or Michelle Jones, they share something in common in that they are both brilliant and inquisitive young ladies who eventually got to find out Peter Parker’s alter-ego is Spider-Man.