Tunisia shocked 10-man Nigeria 1-0 in an Africa Cup of Nations last-16 match in Garoua on Sunday, with veteran Youssef Msakni scoring the only goal.

Coach Augustine Eguavoen picked his favored starting lineup against the Carthage Eagles of Tunisia, and the Super Eagles got off to a fast start. After only 30 seconds, Moses Simon won Nigeria’s first corner kick, and two minutes later, Wilfred Ndidi attempted a bicycle kick, which went wide.

Nigeria dominated for the majority of the first half, and there were a few full-blooded tackles in the first quarter of the game as the two sides assessed each other. Kelechi Iheanacho received the game’s first yellow card for a slap on Bilel Ifa’s face. Hamza Rafia had a shot in anger for the Tunisians as they grew more confident and had more of the ball possession. 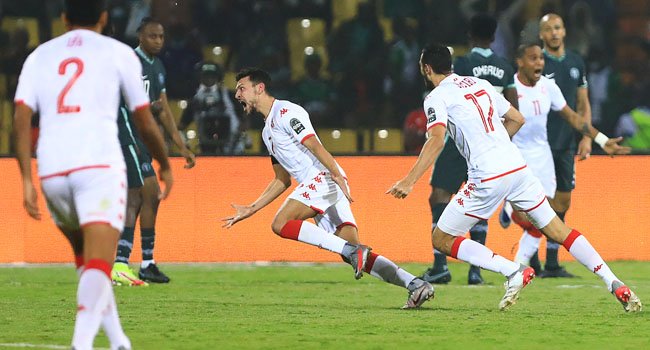 Tunisia broke the deadlock just minutes into the second half as Nigeria goalkeeper Okoye fumbled a furious Youssef Msakni shot. In the 59th minute, Iwobi’s studs-on-stamp was found worthy of a VAR check, and the earlier yellow card was elevated to a red. The Everton player was only on the field for four minutes before being ejected.

At the start of additional time, Nigeria had a golden chance to equalize when substitute Umar Sadiq went behind the defense and fired across goalkeeper Bechir Ben Said, only for his shot to fall wide of the far post. The North Africans will meet Burkina Faso, who eliminated Gabon after a penalty shootout In the quarter-finals of the premier African competition next weekend.