The Nigerian’s brilliance earned the Blues all three points in their league trip to Veneto. Victor Osimhen scored twice for Napoli in their 2-1 victory over Hellas Verona in Sunday’s Serie A match.

The Nigerian international scored in both halves as the Blues improved their prospects of winning the Italian top flight. The Parthenopeans traveled to the Stadio Marc’Antonio Bentegodi, still hurting from their 1-0 home loss to AC Milan, hoping to get back on track.

Napoli took the initiative and took the lead through Osimhen, who was put up by Matteo Politano, in the 14th minute, knowing they couldn’t afford any more mistakes. Politano’s pinpoint throw from the right flank found the African striker, who emphatically headed the ball past a hapless Lorenzo Montipo in the goal. Verona, on the other hand, despite having 56 percent possession, failed to score a shot on goal in an uninspiring first-half display. They improved in the second half, but were unable to disturb the visitors’ backline, which was marshalled by Kalidou Koulibaly. Osimhen doubled Luciano Spalletti’s lead with 20 minutes left on the clock, scooping the ball home after being set up by Giovanni Di Lorenzo. 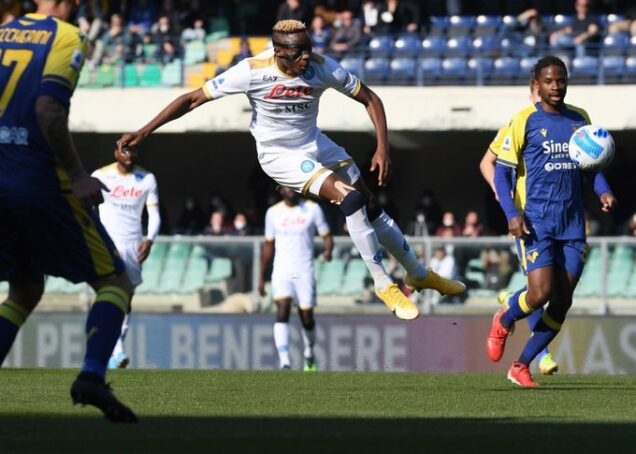 Seven minutes later, Verona equalized with their first shot on goal, as Davide Faraoni headed home Adrien Tameze’s enticing cross to set up a tense finish. Despite this, the hosts’ hopes of a draw were dashed when they were reduced to 10 men after Federico Ceccherini’s second yellow card, allowing Napoli to extend their unbeaten away record to eight games in all competitions. Even with his heroics, man-of-the-match Osimhen – who has eight league goals in the 2021-22 season – was pulled off in the 90th minute for Andrea Petagna.

Osimhen’s African teammates Koulibaly and Andre-Frank Zambo Anguissa, on the other hand, were on display from beginning to end, with Algeria’s Faouzi Ghoulam making a cameo appearance. Napoli ascended to second place in Serie A with 60 points from 29 games, three points behind AC Milan. In their next match, on March 19, they will host Udinese at the Stadio Diego Armando Maradona.