Both team faced off in a game that could have great implications for a place in the top four
The game started with a very high tempo with both teams looking to draw first blood but Chelsea had to attempts at goal in the first ten minutes
Kante had an early injury and was replaced by Mount but that seemed to swing the momentum to man Utd favour.
Batshuayi missed the best chance of the game yet after some good work from Pedro and Mount.
In the 36th minute Willian received the first booking of the game for diving but down at the it was Martial’s turn to miss a golden opportunity.
The goal finally came in the 45th minute after Martial nodded home Wan Bissaka’s cross. 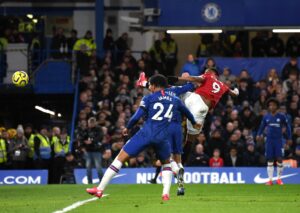 Batshuayi had another chance to equalise in the last minute of the game but he dragged his effort far wide.
Zouma got a goal that was disallowed for a supposed push on a man utd player.
Man Utd doubled their lead in the 65th minute when Harry Maguire nodded in a corner that was taken by Bruno Fernandes. 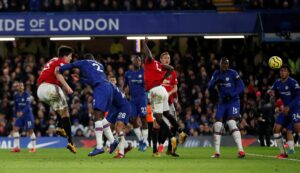 Giroud also had a goal disallowed by VAR for offside after his boot was over the offside line
Chelsea pushed for a late consolation but the closest they got was from Mount when he rattled the post.
At the end it was a big victory for man utd who closed the gap between them and Chelsea to 3 points.
The race for the top four is heating up.