After back to back victories for Arsenal in EPL and FA cup respectively, some fans can be forgiven to think this would be three straight wins for the Gunners but derbies are unpredictable and that’s how the game at Selhurst park also turned out.

Aubameyang got Arsenal to a flying start just after twelve minutes after a build-up that involved 18 passes and ended up with Lacazette providing the assist but just as the case against Chelsea they never really kicked in from that point.

There is something that is very evident, they know how to start games as they have scored first in their last five games but in three of those matches they have failed to win.

The gunners will be glad in the fact that Arteta seems to have figured out his starting 11 Something Unai Emery never got but the the red card to Aubameyang and a misfiring Lacazette would surely slow down his teams progression. 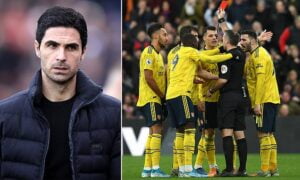 But so far it’s been a bittersweet experience for Mikel Arteta and his boys.