Once regarded as the best talent in world football, Joao Felix Sequeira announced himself to the world in 2018 and would go on to end the season in 2019 with 18 goals and 8 assists for Benfica in 33 games in all competitions.
Atletico Madrid will go on to win the race for his signature after what seemed to be an auction for the “most coveted talent in world football” according to Enrique Cerezo, Atletico’s president.

Here’s an in depth look at Felix’s playing style, his strength and weakness, and how he fits in at his new club, Chelsea.

This Portuguese talented footballer was born into a middle-class family on 10 November 1999 in Viseu, Portugal.
Carlos Sequeira is his father, and Carla Felix is his mother. Carla Felix, Carla Sequeira’s mother, and Carlos Sequeira, his father, were both teachers.
He is his family’s first son and first child. Hugo Felix is his younger brother and plays football too. Joao and his family lived in Viseu, his hometown, and when he was just 8 years old, he began his youth career with OS Pestinhas.

He does not smoke or drink, and he also does not have any tattoos. Although he favors Christianity, he is not a religious person.

JOAO FELIX GIRLFIREND?
Joo Félix, like most celebrities, tries to keep his love life and personal life private.
Joao Felix has not yet tied the knot because he sees himself as too young. There are no rumors about his love life though as he is currently single and concentrating on his career. Joao Félix does not currently have a girlfriend, even though @CelebsCouples claims that Joao Félix has been in at least one relationship before, he has never been engaged. 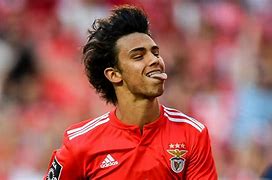 João Tralhão, his former youth coach at Benfica, praising Félix’s versatility said, “He can play anywhere [in attack], because he always finds the spaces to do what the coach wants. He understands that positioning like few in the world, he’s very clever.”

João Félix started out as an attacking midfielder or a left-winger, his versatility allowed him to influence games higher up the field. Felix’s creativity and passing were his two strongest attributes alongside his spatial awareness and finishing abilities.

In his time with Benfica B, he was the creator for his side, his silky passes and mazy runs from outside into the box made it difficult to track his movement, his movement in the box was that of an elite striker and his creativity outside it was of a veteran attacking midfielder, meaning he was versatile to fill multiple positions, but best suited to a second striker role which is extremely similar to being an attacking midfielder.

The Portuguese has had to evolve over the three years he spent at Atletico Madrid, having to be the more advanced forward in Diego Simeone’s 4-4-2. Much has been said about how low his output was as a striker/center forward, with his highest goal scoring season producing 10 league goals in – appearances.

His challenges as a center forward in an ultra-defensive Atletico Madrid setup were visible for all to see, having to focus more on defending from the front than creating and scoring goals which are his natural abilities, Felix would be said to have “lost himself” at some point.

Time spent in those forward roles has somewhat helped the player to reinvent himself into what is now called a false 9. In the mould of a Thomas Muller, Chelsea have got themselves a player who improves his teammates by exploiting spaces or dragging defenders along to create space for his teammates. Felix is not known for electric pace, but what he lacks in speed he makes up for in trickery and his ability to pick the perfect pass at the perfect time. His hold-up play and link-up play has also improved with periods in the striking zone. He has improved playing with his back to goal and has somehow managed to keep himself useful at a time when players of his ilk are going out of vogue.

STATISTICS AND WHAT IT MEANS.

For a player signed for $126million, at 18years of age after impressing for just one year in topflight football and for all we know about Diego Simeone’s Madrid side, these numbers present a mixed bag as one cannot say he has not done well, and one cannot categorically say Felix has been successful after his big money move to the Spanish powerhouse.
Key ingredient is the sheer amount paid for a teenager who only had one season in the men’s game, if Felix was signed for 40-50million, the jury would have scored him successful, but the hype means that expectation in the sport is proportional to the amount spent.

HOW DOES FELIX FIT IN AT CHELSEA

For about twenty odd years in the upper echelon of European football, this is the first time Chelsea football club are in a genuine transition. The team is so out of sorts these days that one would be forgiven to forget that they were Champions league winners a couple of years ago.

Roman Abrahmovic and his team of geniuses, Marina Gravnoskaia, Mike Emenalo, Petr Cech to mention a few, have all left the club. The Russian businessman invested his heart and soul into the club and did his best to sustain a period of glory, employing the best in the business from board members to managers, coaches and players.

That era has passed, now, there seem to be no continuity as American Tedd Boehly has taken over, and in less than three months and after one transfer window, sacked Champions League winning Tuchel and replaced him with Graham Potter, whose struggles are well documented at the moment for all.

Tactically, Felix cannot be the solution to the Chelsea problem, but the team is so bad right now that any light will feel like sunshine. Pulisic, Mount, Havertz, all these players seem like no. 10s, and that’s what Felix is as well. He would have to play in the false 9 position that has been occupied by Havertz recently, in a system that would have both players switching places like a pair of forwards, and hope both are able to cook up a partnership, with their similarity meaning an understanding would be easy to muster. Potter’s hope to salvage his season would hinge on Felix delivering the goods, immediately.

Sitting 10th in the Premier League and 10 points behind fourth-placed Manchester United, a haul of 20 league goals is comfortably below every single club above them in the table, the same total as Aston Villa, and also fewer than Leicester City (26) and Leeds United (25) below them.

Eight players on one goal

Raheem Sterling is their leading goalscorer with six goals in all competitions this season, and by contrast Erling Haaland leads the way for Manchester City with 27, Harry Kane has 17 at Tottenham, Mohamed Salah 17 at Liverpool, and Marcus Rashford 15 at Manchester United.

Arsenal, meanwhile, may not boast one single player with more than 10 goals, yet, but with Bukayo Saka, Martin Odegaard, Gabriel Martinelli and Eddie Nketiah all scoring seven apiece so far this season, it is evident the burden is being shared at the Emirates at a time when no players are stepping up at Stamford Bridge.

To therefore think that Felix is the sole answer to this issue would be foolish. He has five goals in 20 appearances this season, 34 goals in 131 appearances since joining Atletico, and while he is arguably a step up on Chelsea’s other wide options and can also play centrally, in truth he appears to be a mere stopgap until Christopher Nkunku arrives in the summe, as has been reported.