Music is a lifestyle and that goes without saying. From playlist being curated for events and ceremonies like weddings, birthdays, funerals; it is easy to identify these music just based on what is being played or aired.

The #EndSars protest has caused an uproar to say the least, from youths airing out their opinions by means of protest to social media to everyday conversation, we can definitely say this movement (or revolution as some wish to call it) is here to stay till the people see a definite change regarding their demands.

We have seen citizens of the country both ones based locally and those in the diaspora come out to reprove the actions of the Police Force and their arm, the Special Anti-Robbery Squad (SARS) with regards to how they profile citizens especially youths in the negative light, unlawful arrest, maltreatment of citizens and incessant killings of innocent citizens. Not only has the #EndSars movement been a force to reckon with locally in the country but also international acts have joined in these protests ranging from Hillary Clinton to Cardi B to Pierre Aubameyang and many more.

Music like said earlier is a lifestyle, it knows no bother and musicians use this tool to address anything and everything, the #EndSars protest is not an exception as we have seen artistes use their mediums to spread awareness regarding the improper actions of the Nigerian Police Force (NPF) and their brother-in-law, SARS.

Ranging from Nigerian music acts to international acts, none have held back their disdain to what is currently going on in the country. From Falz to Stonebwoy to Trey Songz, all have shared how they condemn this inhumane acts and demand change be done regarding the issue. In this article we will focus basically on how musicians have used their lyrics to spread light on these issues of police brutality, unlawful arrest, negative profiling of youth and killing of innocent citizens in the country.

Safe to say, these issues are not new as we have seen older generations of musicians speak about it, Late Fela Anikulapo Kuti to Raski Mono to Eedris Abdulkareem to African China and many others have all spoken on the current issues we are facing in the country with their music which date back as far as the 1970s in the case of Fela just to show that musicians never held back on speaking about the issues affecting the average Nigerian citizen but in these articles we focus on the current generation of musicians we have and how they have spoken on these issues, please enjoy: 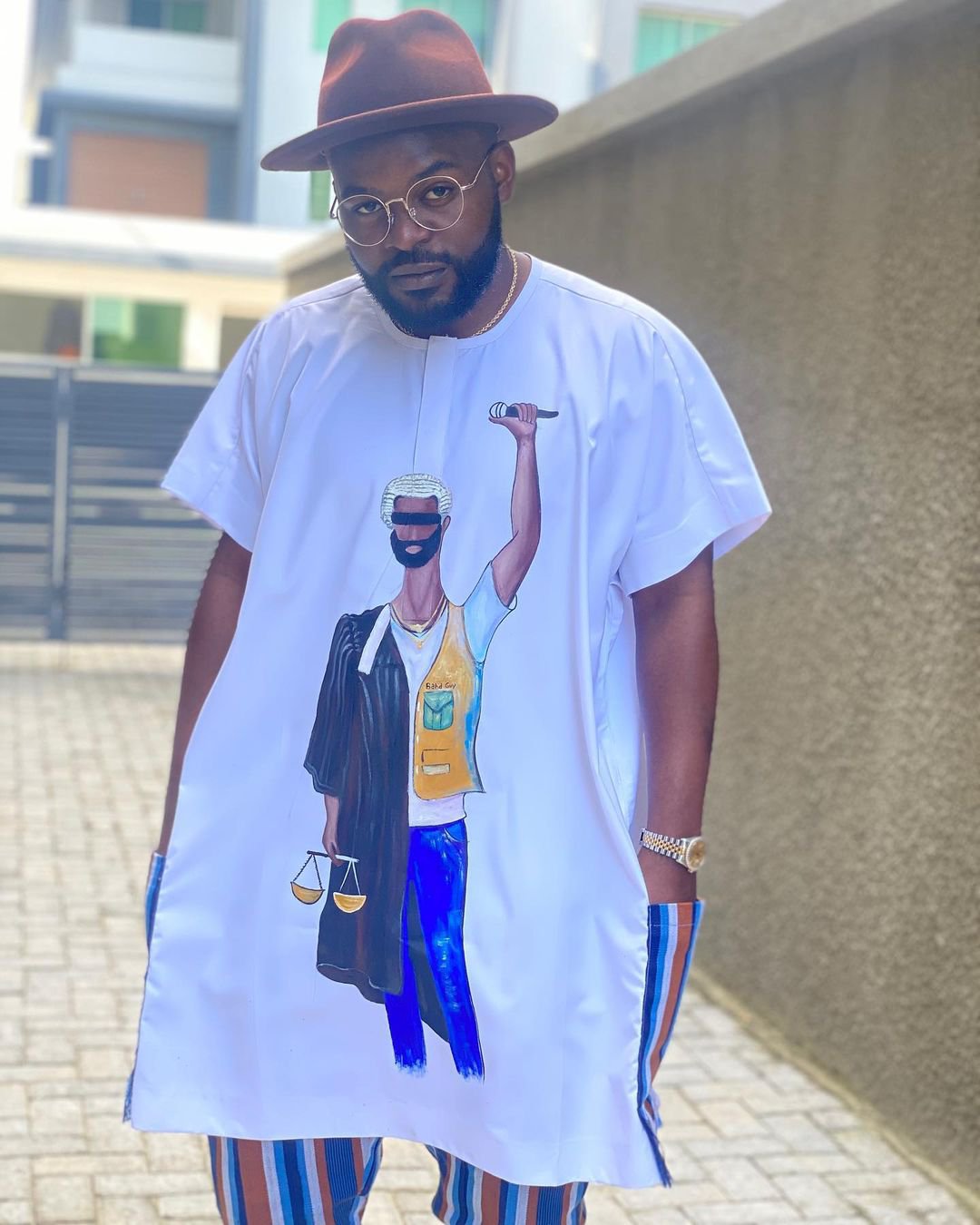 Falz – This is Nigeria (official video)
Quote: “This Nigeria / Look at my nation o / SARS stop me for road any explanation you go talk am for station o”. Here rapper Falz highlights one of the flaws of SARS which is the negative profiling of innocent young ones which they do by mentally reasoning on the fact that once a youth is dressed nicely and looking good, drives a nice car and uses a good phone especially an iPhone, then he must be an internet fraudster, popularly known as a “Yahoo Boy” and definitely needs to be harassed and/or extorted for money and this can only be done by them (the SARS officers) stopping the person and unlawfully arresting such young ones. 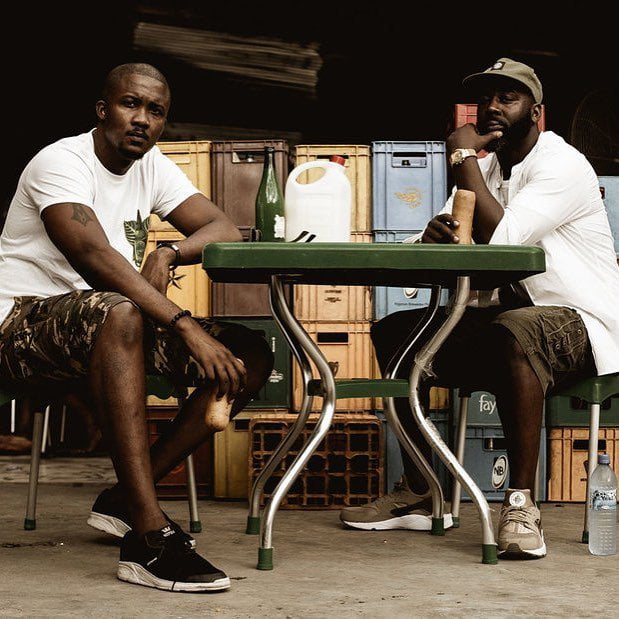 Show Dem Camp – Hunger Cries (audio)
Quote: “I’m politicking with the squad
/ On how to hack this systems flaws but / You don’t need a Crystal ball / For you to see through this mirage / Boko haram still bombing niggas/ SARS is out here robbing niggas”. Ghost, an SDC member rhymes on how it is very clear to see how SARS operates in the country through one of their vile means of making money which includes daylight robbery and extortion of young ones or their victims by forcing them to the ATM or forcefully demanding for money at the spot where they stopped these victims and if they (the victims) fail to comply, it’s either unlawful arrest and/or maltreatment or sadly in some cases death of such ones. 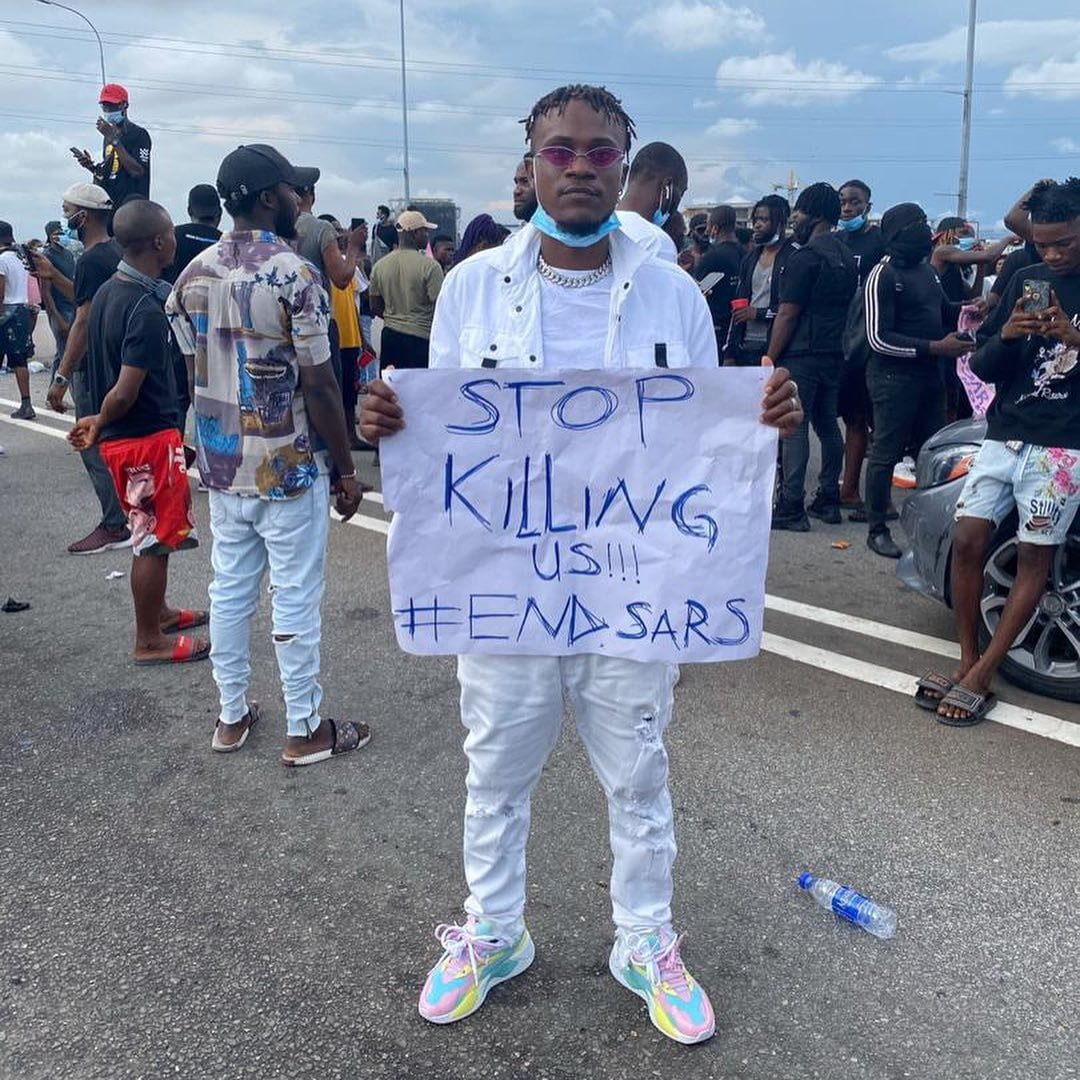 Dotman – (#EndSars) [official video]
Quote: “As I dey Go ooo / La won Sars ba mu mi / Won bere si ni bu mi / Won ni mo jo omo Yahoo / Mo lanu mo sey wawu / Bi mo shey fe ma claim Right mi, lo ba left mi / O lowo kan Opolo mi reset ni / (Igbaju oloyi) / Them collect my iPhone / Won gbe mi si inu Danfo oo” – on this song, singer Dotman predominantly speaks Yoruba but translated to English, he laments on how SARS officers stopped him one time and wrongly accused him of being a “Yahoo Boy” and how he tried telling them he does not engage in such activities but even before he could explain anything, he received rounds of slap (a form of maltreatment) and how they (the SARS officers) quickly tried arresting him and put him inside a mini-van popularly known as Danfo (one of the buses you will see SARS use in carrying out their illegal activities). 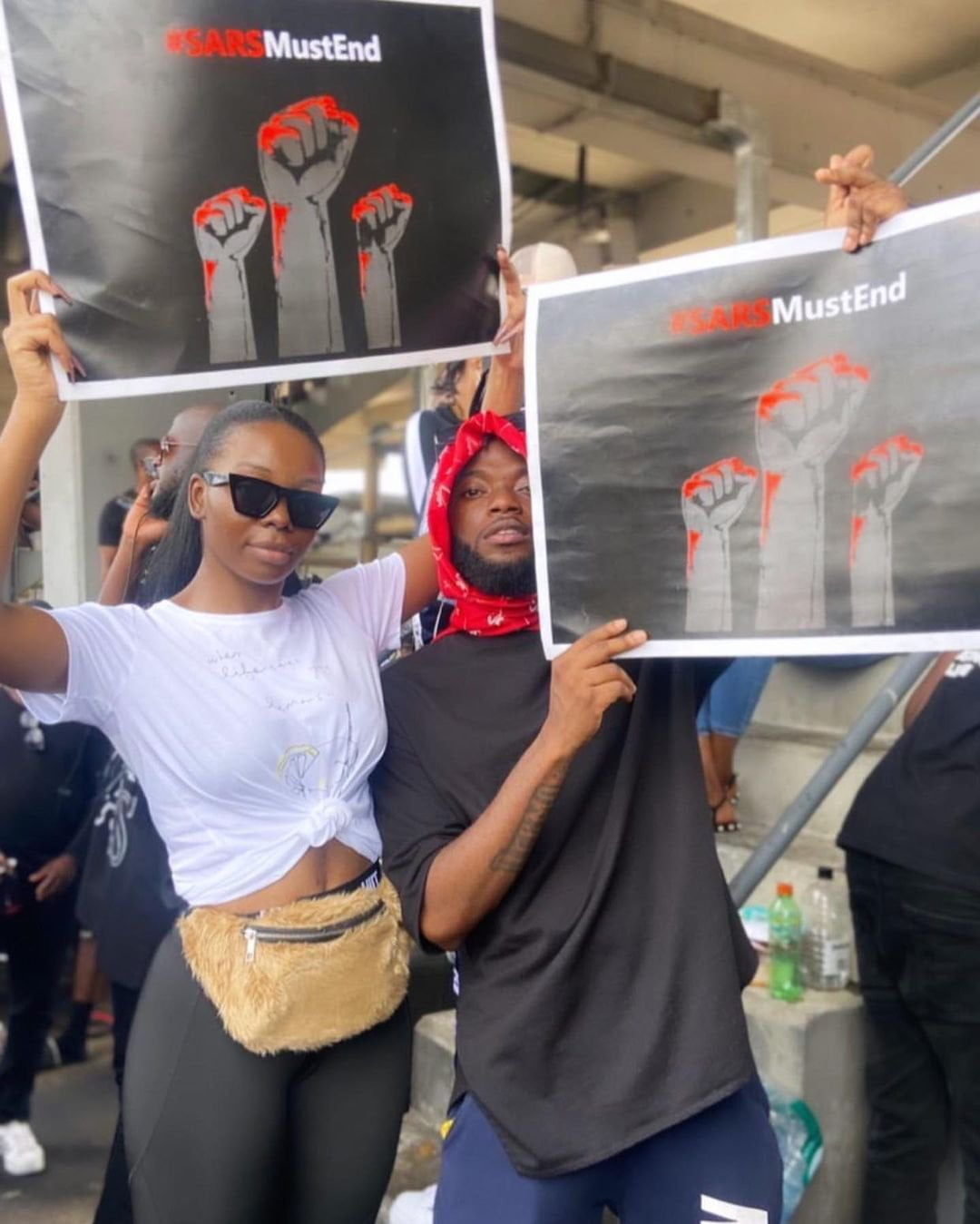 Dremo – Thieves in Uniform (audio)
Quote: “You can never trust Sars with a gun / A de le trust ole pelu ibon / So the difference is not really much / Dem just be armed robbers in uniform / Dem no dey try protect us (protect us) / They only tryna extort us (extort us) / The government won’t even say a word (FEM) / Not until their family dey involved” – here Dremo laments on how we ironically can not trust the people (SARS) who are actually meant to serve as protection for us based on their acts and how quick they are to pull the trigger; likening them to armed robbers, Dremo says the difference is not much and laments how the government have done little or nothing to come to avail these pressing issues. 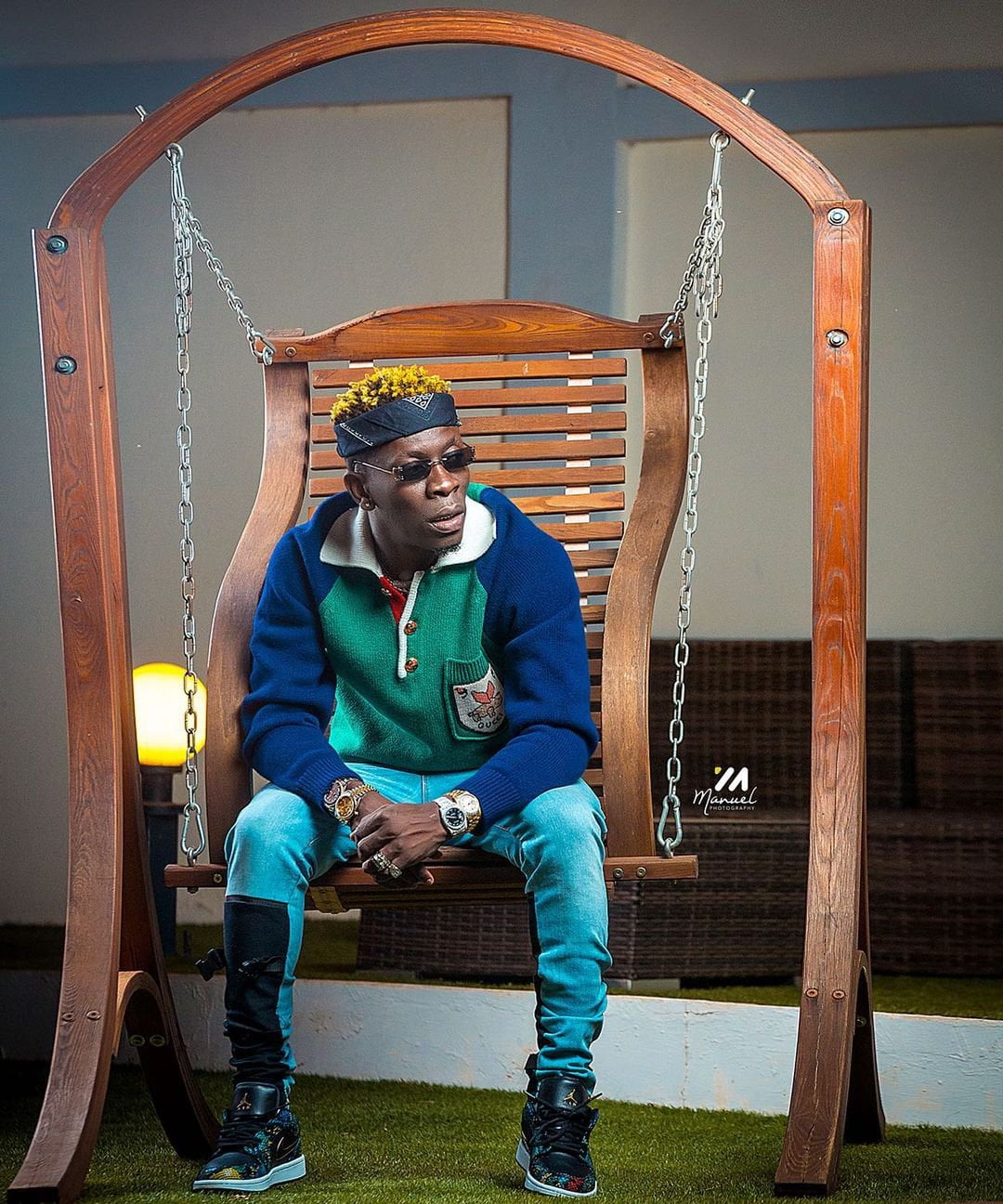 Shatta Wale – Fuck SARS (audio)
Quote: “It’s our duty to [make] sure we support Africans you know / Sometimes I wonder why things happen in America / And Europe and Black people support / But when is Africa, Africans don’t want to support it / Tell them to end SARS / Stop SARS / Stop the blood . . . Killing innocent people”. Ghanaian artiste, Shatta Wale admonishes (on the song) the empowerment of black people, calling on black people to always show support for one another as it is evident by black people living in the diaspora who are always willing to show support for what is going on in their home country but the opposite is the case for black people in Africa as we have currently seen cases of maltreatment and injustice taking place not only in Nigeria but the entire Africa like Congo and South Africa but he didn’t dwell on that topic for too long as he draws back attention to the main focus of the song as he calls for the end of SARS and a stop to killing of innocent citizens of the country.

Many other artistes have also lend their voices on the #EndSars issue made evident by recent BBN winner, Laycon on “F-ck You (End SARS)”; controversial rapper, Naira Marley on “Am I A Yahoo Boy?”; Kizz Daniel on “Ja” just to name a few.