Former housemate of Big Brother Naija, Ifu Ennada a Nigerian film actor and fashion designer  Ifu, born in Abia State but raised in Lagos. In an interview in 2018, she revealed that she had been sexually harassed in 2016. She revealed yesterday on her Instagram story that she is considering getting married to three men. 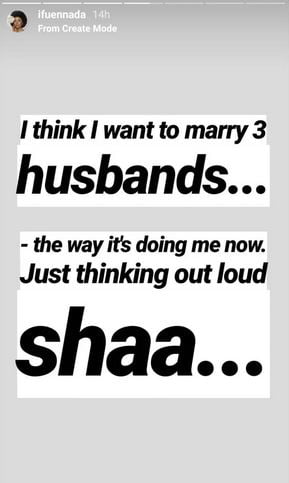 This coming after a huge success in her career after becoming an award-winning actress known for winning the AMAA award for Best Young and Promising Actor in the movie O-Town. This has caused controversy and reaction from Nigerian ever since she posted it.